You wake up with some marks that look and feel like a burn, but you have no recollection getting them. Welcome to one of Bali’s biggest mysteries (which we are happy to solve for you).

First let us introduce you to paederus riparius, otherwise know as the Tomcat – an insect you’ll probably never even see but will know if you’ve been near one thanks to its toxin which is more potent than cobra venom. These guys belong to the insect order Coleoptera (beetles) and the family Staphylinidae (rove beetles). Adult Tomcats beetles are quite small: 7-10mm long and 0.5-1mm wide (so around the size of a large ant). For something so poisonous, they look innocuous with their black head, lower abdomen, and elytral (structure covering the wings) and a red thorax and upper abdomen. 1,4 Not all Rove Beetles cause the skin irritation we associate with Tomcats – that is the specialty of the species belonging to the subfamily Paederini – of which Tomcats are a member.

Rove beetles are found in many countries and like to live in moist habitats such as crops, riverbanks and marshes, which may explain why they are fans of Bali’s rice paddies.1,4 The beetles are commonly seen in the rainy season or after particularly hot and humid weather.3,7

During the daytime, these beetles can be seen crawling around on the ground, with their wings hidden and could be easily mistaken for ants. Adult Rove Beetles are predators of other insects. At night they are frequently found around light sources, which means they often inadvertently come into contact with humans.1,2,4

Unfortunately, Tomcats are attracted to artificial light9 and will migrate into houses through open doors or windows. Nighttime contact is most common; patients frequently report waking up with unexplained lesions or itching the next day, suggesting a beetle was accidentally crushed while sleeping. Exposure may also occur during the day, usually through occupational activities.8 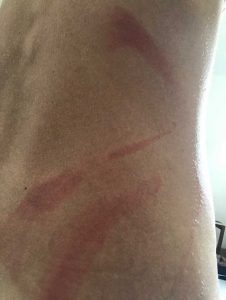 Burns on the back from secondary exposure to Tomcat Beetle venom

Tomcat beetles are members of the subset of Rove Beetles with the toxic venom which causes paederus dermatitis due to their highly toxic venom. Tomcats do not bite or sting, but accidental brushing against it or crushing it near the skin provokes the release of its coelomic fluid, which contains paederin, a strong blistering chemical.1,2,4 The pederin toxin is incredibly potent, even in small concentrations8 and can transfer to the eye area and genitals if an individual touches these areas after crushing the beetles. Even using towels or sleeping on a sheet with which the beetle has been in contact can lead to burns.

Since the beetle is usually crushed and smeared across the skin, the resulting lesions are usually characteristically linear. Lesions are most commonly found on the face, neck, trunk and forearms. Though hands are usually involved in the initial crushing of the beetle, the thick skin on the palms and soles of the foot seem to be less affected by pederin due to its thick dermis in those areas.8 Intense burning, stinging, and itching are commonly reported exposure sensations.8 Tomcat burns from exposure to scarring

Due to the smash and smear method of exposure, redness patches will evolve into blisters with edema (swelling) and a continuing sensation of itchiness and burning.10 Eruptions may last from a few days to weeks. Following this, the inflamed plaques and pustules (blisters with pus) can become crusted patches. Scarring and hyperpigmentation post-infection may also occur. In some patients, headache, fever and nausea are also reported.10

Preventing human-beetle contact is the primary method of preventing paederine-based trauma. Above all else, if you see a Tomcat, do not handle or handling or crush it. Blow or wash beetles off your skin, and if you need to exterminate, use spray with chemical insecticide spray then sweep them up and dispose of them. If you’re in an area prone to the beetles, minimise outdoor lighting at night, as this will attract them. Nets can be draped around sleeping areas and under lights to catch stray beetles. Finally, swapping artificial light sources like UV-producing bulbs for incandescent or halogen lights may attract fewer beetles.9

Most people who are burned by Tomcats in Bali find they never see the Tomcat that gives them the burn, however, if you’re in an area with a known problem, taking other insect-smart precautions can’t hurt:

Remember that beetles can cause symptoms, alive or dead so always avoid handling the beetle directly.

If the exposure is noticed immediately (minutes after crushing), individuals should flush the exposed area with soap and water.8 This can help since the toxin penetrates the skin slowly. Washing shortly after exposure will remove much of the toxin before it has time to harm the skin. Apply a wet compress to help dilute the toxin’s concentration and relieve burning and itching. Topical corticosteroids can be effective in alleviating symptoms and swelling11 Antihistamines are also commonly given to reduce the inflammatory response to the pederin toxin and ease the itch (since excessive itching / scratching of lesions may result in open wounds). In some cases, the patient might need antibiotics to reduce the risk of secondary infection from any open skin abrasions.10 When headache and/or fever are present, acetaminophen for general pain relief is advised. With appropriate treatment, lesions usually resolve in a few days or weeks, depending on severity.

Be careful with treating the skin irritations, as some traditional remedies can actually make the marks worse. Always seek medical attention for any severe skin reactions to the toxin.

Paederus beetle exposure is irritating and sometimes painful but can be managed more effectively if people know the source of the marks. Education and prevention are our best bets in dealing with this tiny menace.